Christmas is coming, and we’d like to wish you happy holidays!

“story of a mother and child who learned to walk alone” 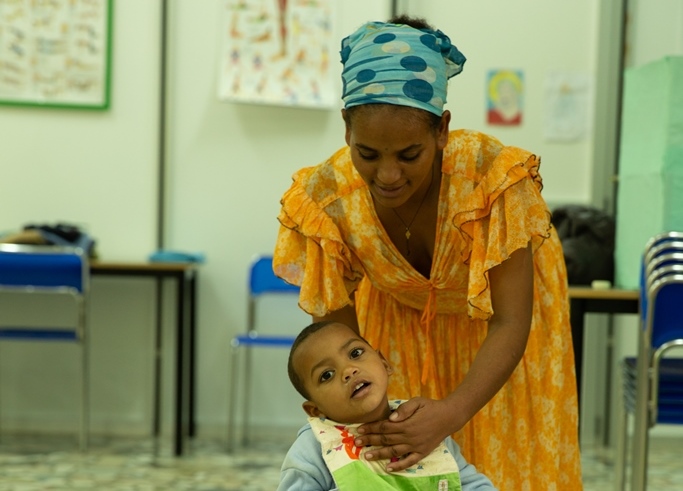 Aregawi was born to a young mother with no formal schooling. His father abandoned the family as soon as he learned of his son’s handicap. Something had gone wrong during the birth (though we don’t know exactly what, as there are no written medical records in Ethiopia’s public hospitals). The child has a muscular dystonia, meaning he cannot keep himself upright or swallow his food properly, which caused him to become seriously malnourished, putting his life in danger.

His mother, Beriha, just over twenty years old, didn’t know who to turn to or how to survive, so she went to the sisters of Mother Teresa of Calcutta, who accepted her and her son into their community. But Aregawi’s weak muscles had never been stimulated, and at the age of three, he still couldn’t grip an object or use his legs to move around unaided.

At this point Sister Betty, a missionary at the charity institution who offers her services as a physiotherapist at the Adwa mission, was asked to help. Aregawi began daily therapy aimed at recovering the ability to use his muscles. Every morning mother and child come to the clinic to do their exercises, encouraging Aregawi with toys, such as a tricycle or a little toy dog to walk, obtaining encouraging results. The gentleness of this mother and her fragile little boy struck the volunteers who came to the mission, particularly Anna Maria, who decided to help Aregawi with a long-distance adoption to cover the cost of his daily physiotherapy. Anna tells everyone how she was struck by Aregawi’s splendid smiles as soon as she saw him.

How exciting it is to watch the video in which Aregawi – now four – walks for the first time, aided by his mother, pulling the little toy dog along behind him!

Watch this video: click on this link: bit.ly/aregawi or scan this QRcode

His young mother Beriha has learned the exercises she has to do with Aregawi so that he can continue at home, just as he would with Sister Betty at the Mission. She now lives with her parents and no longer requires help from the nuns: she has resumed her studies so she can get her diploma and find a job. She now knows that Aregawi will be able to improve and learn new skills if she supervises him with all the constancy and willpower she has demonstrated.

But what does it mean for a child like Aregawi to live with a handicap in Adwa?

Before Sister Betty set up her physiotherapy clinic, there was no such service: people who had a motorial disability from birth or as a result of injury received no help at all.

What’s more, in the event of an accident, they couldn’t even have an X-ray to find out what was wrong. This made the probability of suffering permanent damage even higher.

There is not even a chance of obtaining an artificial limb or orthopaedic aid: there is no known production or sale of these items in the Tigray region.

People sometimes turn to traditional medicine, paying healers to say prayers and dip patients in “holy water” to cleanse them of the evil eye… but, as one might imagine, this rarely solves the problem! In fact, it sometimes makes it worse, adding risk of infection!

People with a motorial handicap are unable to work in most ordinary jobs, and have to make a living doing little jobs at home, such as weaving, or live on charity on the margins of society. It’s easy to imagine the architectural barriers such people come across as they attempt to get around the village: in some places the roads are so rough not even a four-wheel drive can get through!

For all the children who are born with a disability or become disabled due to the circumstances of their lives, the physiotherapy service at the new hospital in Adwa is of key importance for becoming independent!

Much of the equipment now in use was, fortunately, donated on Sister Laura’s 70th birthday; new machines are now being bought thanks to a new donation.

We are asking you to help support free physiotherapy for patients like Aregawi who cannot pay for it:

Christmas is the perfect occasion for helping children like Aregawi and their mothers to learn to walk independently along the path of life!

Thank you for your generosity!