Posted at 10:16h in News Archive (en), Their stories by Silvia

On Christmas Eve 2015, Sister Laura sent us a special message:

“Dearest friends, this is the BABY JESUS that Divine Providence gave us today, even if here in Ethiopia, Christmas is in 2 weeks: a baby about 5 months old, abandoned on the street, brought to the Axum hospital by passers-by and finally, given in custody to the mission because the doctors don’t know what to do. We’ll see if we can’t bring this “Baby Jesus” to a hospital in Italy to try to understand the nature of the deformity and, if possible, cure it.

You might find the image to be cruel and unfit for Christmas, a holiday of light and joy, of exchanging gifts and peace in the family. But in this year of mercy, to us it seemed like a message directly from God of Life who decided to become a Child in a manger. We consider this baby our Christmas gift and we want to include you: you, who help us fight for the lives of our children, will certainly understand the emotional impact it has had on us. We will let you know, if you wish, what doors have opened for the little one”.

She had attached a picture of a baby boy with a chubby, smiling face but whose back was deformed by a large growth that did not allow him to lie on his back. We’d rather not post it…

It is a case of myelomeningocele. Those of us who have had a pregnancy in Italy were prescribed folic acid to prevent spina bifida and the like… but we had never actually seen what the danger is: the risk of meningitis, paralysis, death.

While helping Milete, a little girl from the Adwa school that had been hit by a car, at the Axum hospital, Sister Laura and collaborators noticed a tiny baby left on a cot with a bottle of tea, as if abandoned. Once they asked hospital personnel about him, they found out that the little one had been abandoned because of his deformity, but no one at Axum was able to operate on such a severe pathology. The nuns began feeding him, dressing him, washing him, cuddling him…at first, he never cried, he never interacted. But then he came back to life.

Obviously, from that day, Sister Laura rolled up her sleeves and called all the most renowned paediatric hospitals in Italy to find someone who would agree to operate on Yesus. Fortunately, she found the answer at the Bambin Gesù Children’s Hospital in Rome.

Once all the papers to leave the country were taken care of, thanks also to the contribution of friends from Cento and elsewhere, the little one arrived in Rome and had two surgeries. A team of doctors did the second, more important one (lasting 12 hours!) on 27/01 and it went well. In post-op, he risked having an embolism…but fortunately, he made it through.

Sister Laura, along with the Bambin Gesù social services, began working to find a family here in Italy that could take him in. In fact, Yesus will need constant monitoring and periodic surgeries to replace the valves put in by surgeons, something that is not possible in Ethiopia. On 25/01, she launched an appeal on the TV2000 show “Bel Tempo Si Spera” (WATCH THE EPISODE). 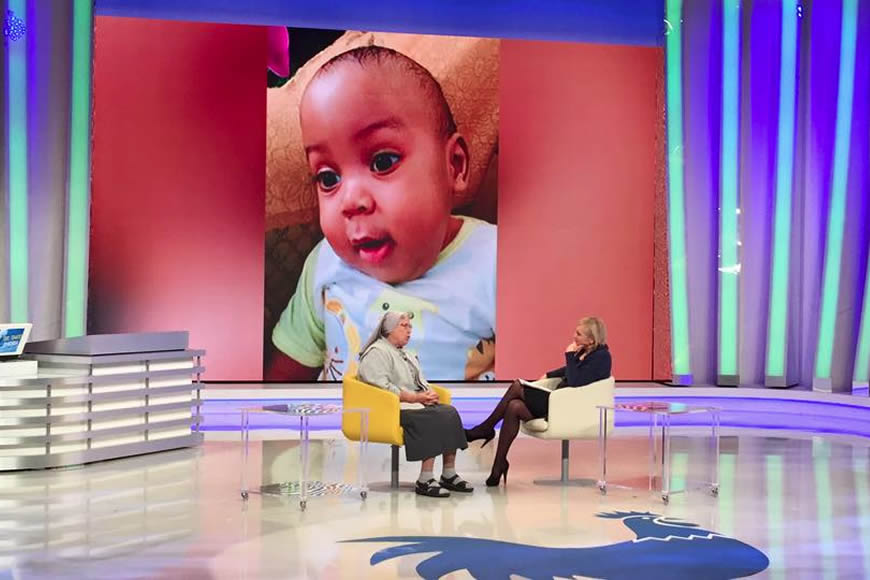 Below is the link toSister Laura Girotto’s interview on Radio Vaticana, where she tells Yesus’ story.

In February, they found a foster family for the little one in Rome. It is a generous Roman family with 6 children…we are sure that the baby will find the help and comfort he needs with them.

At Bambin Gesù, the little one was monitored and treated with experimental therapies to heal the wound on his back, but he needed additional plastic surgery. 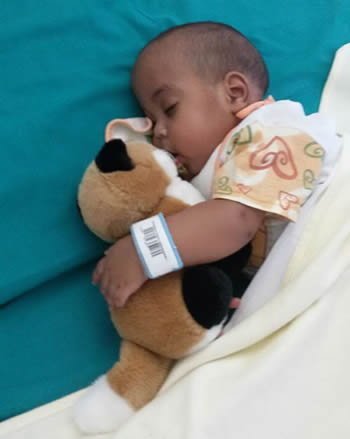 In April, Yesus was transferred to the Palidoro facility of Bambin Gesù for rehabilitation. Tucked away in the green surroundings of a gorgeous seaside area, the facility offered to help correct the issues with the curvature of his spine and the deformity of his little feet with devices, prostheses, and physical therapy. Here, too, the medical-nursing staff was brilliant and welcoming. Heartfelt thanks for the highly qualified, loving assistance given to Yesus!

At the end of May, Yesus was discharged from the hospital!