Posted at 09:26h in News Archive (en), Their stories by Silvia

Sister Laura is meeting all the families being supported by long-distance adoption. At the Mission, volunteer doctors from Italy are giving medical aid. Carolina is skilfully documenting everything with her camera.

A woman with sad eyes arrives, nursing her newborn, knowing it is the last time…here is the story.

A day and a half by car to get to Adwa… They told her there are Italian doctors here. She has 3-month-old twins… A boy and a girl… The little girl is blind and has a deformity in her hips… A woman in tears, at risk of being abandoned by her husband… She looks you in the eyes, she lets you rock and wash her babies… Her voice breaks as she asks you: “Can I leave the girl here? Otherwise my husband will kick me out…”

This is something a woman, a mother, should never be forced to say… But in Africa, after you have already had three children, if you give birth to twins, and one is a girl and blind, this “mistake” is mercilessly thrown in your face by a husband you did not choose.

A few weeks later, Sister Laura wrote us to wish us Happy Christmas 2014: 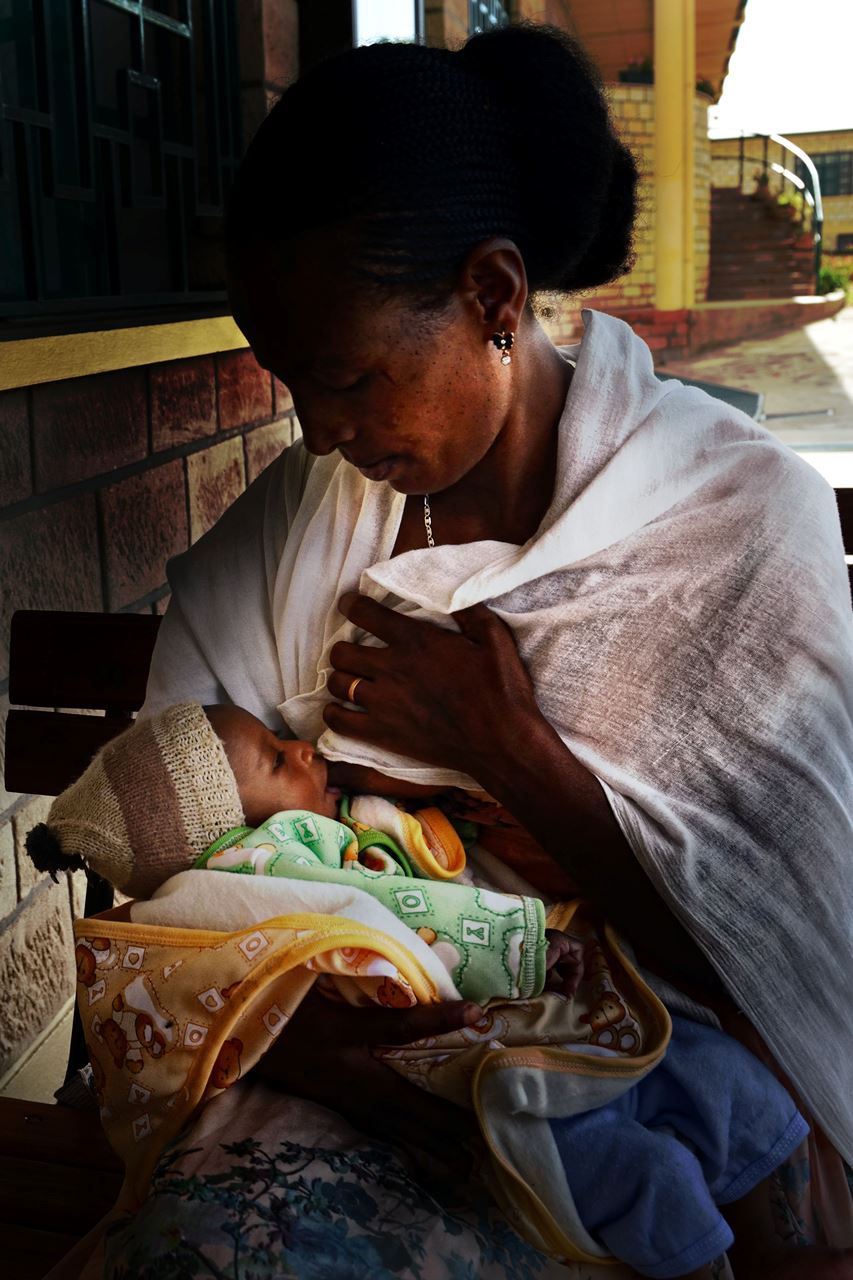 Dear friends of the Mission,
this year, as a Christmas greeting and to thank you for everything you do for the people of Adwa, I want to tell you the story of Tebe, our newest “daughter” given to us by Divine Providence.
Her mother, a village girl, was given to a young illiterate man in marriage, from whom she had already had three children. The last pregnancy was with twins; a little boy and a little girl, who is blind.
The father, exploiting his ancestral rights, rejected the little girl, ordering his wife to get rid of her.
She went back to her own mother with the twins, that she was still nursing, and asked for help: she did not want to abandon or kill her baby. Together, they went to the Sisters of Mother Teresa. But they couldn’t get the baby girl into the international adoption program due to government vetoes.
In the end, they came to us while volunteer doctors from Padua were working at the Mission.
The babies were examined and the doctors noticed their obvious state of malnutrition because their mother did not have enough milk. The woman, weeping, begged us to keep the girl so she could go back home to her other three children with the twin boy.
We held a “council” meeting with the community, nuns and volunteers. The general feeling was that if we refused the request, we would have been accessories to infanticide. The mother would have had no choice but to abandon the baby and….wild animals would have taken care of the rest.
We decided to foster Tebe and raise her until she is 18. Volunteers chose to donate €10 a month each to open a small bank account for her. We found a good foster mother, who already has four of our orphans. Along with the Bureau of Social Affairs and the Juvenile Court, we had the parents sign the necessary papers, and Tebe became a part of our family. The mother, before leaving, begged us to let her nurse the baby one last time. The photographs taken show the whole story.
The entire community, nuns, non-religious collaborators, and our foster orphans celebrated this new life with a home-made cake and a joyful evening. Tebe drank an entire bottle of milk, had a bit of a gassy colic (she is not used to eating!), then fell peacefully asleep, never waking even as we took turns holding her and cuddling her.
Tebe’s future? First of all, SHE’S ALIVE, SAFE AND LOVED.
Right away, she’ll starting spending her days at the nursery school for lots of auditory stimuli and socialising. We’ll do everything we can to get her into the Addis Abeba school for the blind, and maybe the future course for physical therapists in our new hospital…
Your donations, dear friends, will also benefit Tebe: now she is a bit your daughter as well, as are all the children at the Mission that you give a little piece of life to every day. May this be our Christmas wish! To us, the picture of this mother nursing her baby for the last time seems like a Christmas Virgin Mary, but a crucified Mary as well, as she is forced to lose a daughter that she loves with all her heart. Thank you because, despite the struggles in your own lives, you leave room in your hearts for all the “Tebes” the Lord sends us.
For this, may God bless you!

Sister Laura and the community