Posted at 15:25h in The mission by Silvia

In fact, the Italians were defeated in their first attempt to colonise Abyssinia in 1896 in the very mountains surrounding the town.

The battle is celebrated as a national holiday every March 2 in modern Ethiopia as a historic victory.

In 1936, when Eritrea was already an Italian colony, Ethiopia was conquered and occupied for five years, even using arms prohibited by international agreements. However, the Italians also left behind many buildings, roads, and infrastructure in general.

The arrival of missionaries in the town, at the request of the people themselves, was thus a return with the weapons of solidarity, humanitarian effort, and initiatives to benefit the needy.

Today there are between 40,000 and 60,000 inhabitants in Adwa (not everyone is recorded at the registry office…). The Kidane Mehret Mission is a small city within the city, a driving force for the local economy and a benchmark for education, training, and aid. Over the years, the dusty roads have been paved, commercial and artisanal activities have multiplied, some mud huts have been replaced by houses, or even flat complexes, expats have started to return home.

Adwa is located in the Tigray region and is very close to Eritrea, with which relations continue to be tense and the border is militarised.

The Federal Democratic Republic of Ethiopia is a landlocked nation in western Africa, bordered by Eritrea and Djibouti to the northeast, Somalia to the east and southeast, Kenya to the southwest, and Sudan to the west and northwest.

Ethiopia has a surface area of 1,133,380 km2 and the population is estimated at 96 million inhabitants. The country is extremely ethnically diverse: the main groups are the Amhara (or Abyssinians), the Oromo, the Tigrayans, the Sidama, and the Danakil. 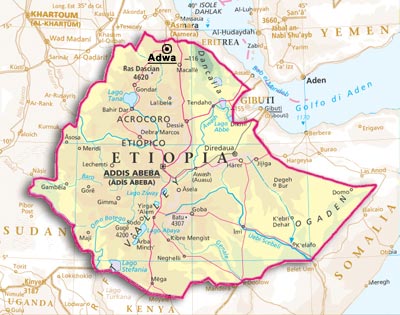 It is one of the poorest countries in the world: the average GDP per capita is US$619 (World Bank data). Life expectancy is 60 years. The child mortality rate is 55 deaths before the age of 5 for every 1000 children.

The percentage of the population living in rural areas is extremely high: the existing agriculture is nearly exclusively subsistence farming. The Ethiopian economy relies heavily on the agricultural sector and most trade is local, with very limited presence on the global market. One of the country’s most important economic resources is the production and export of coffee, by the far the most important crop, employing approximately a quarter of the population. Recurring droughts, coupled with damage from the civil war and conflict with Eritrea, have often forced the country to import staple foods.

Over the last several decades, deforestation, excessive exploitation of pastures and the lack of a land management program have accelerated fertile soil erosion. Deforestation and desertification are worsened by the widespread use of conventional fuels like firewood, which supplies 95.88% of total energy consumption.

Adult literacy is at 40% (2013); since 1952, when only 4% of the population could read and write, education has increased significantly. Primary education is free. The current infrastructure, albeit still insufficient, has made attending school significantly more accessible.